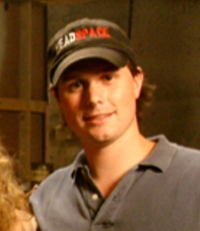 EVOLVER: Modernciné is a very young and recent company. You show a distinct tendency towards horror movies, but also comedies, and - especially in your short films - towards musical, and even social topics as well. In your mission statement you point out the importance of high quality standards in content, just as the will to maintain a profit-oriented business.

How does this all fit together? And what's your personal philosophy - or attitude - as a filmmaker and producer?

Andrew van den Houten: Without creating, I am merely a person with a film degree, talking about movies. If I wanted to review films, or teach at a university or school, that would be awesome, but I am of a Dutch heritage! That's right.  People of Dutch descent are traders, and we cannot sit still for a second. Although I was born in America, I was always around the bargaining and thriftiness of my Dutch father, and the energetic artistic sense of my mother. I guess from a young age I wanted to sell things that I created. I remember selling T-shirts - on Broadway, on an ironing board - that I had tie-dyed, Hippie-style shirts.

Anyway, I was always intrigued by film from a young age. Surprisingly I was exposed to it early on, as they were always shooting films in my parents' pre-war apartment building - The Apthorp - on the Upper West Side of Manhattan. I remember brushing shoulders with Dudley Moore on the way out of my building as a kid, when he was shooting "Arthur Two". I think, I was about as tall as he was, at that time.  I was amazed at how different actors look in person!

I suppose, my passion for entrepreneurship being around New York City, and it's fast wheel and deal mentality; and my gained interest in film production, from everything being produced around me, drew me to watch even more movies growing up. Films like "E.T." amazed me. An alien can really make a kid's bike fly - that's freaking cool for anyone to see, especially in the 80ies! Now it takes a really cool Pixar flick, or mega million dollar studio blockbuster to accomplish the same feeling …

The magic of the movies, whether it was Joe Dante's "Gremlins", Richard Donner's "Goonies", or Steven Spielberg's "Jaws", always intrigued me, and made me question "How do they do that?" But no matter if I could figure out the answer or not as a young kid, I knew it was what I wanted to do!

So here we are, and I am producing low-budget films, and creating a brand Modernciné with two bucks, some matches, and a bucket of Corona's. Yeah, I suppose I am a dreamer, but if you are persistent enough, dreams do start to take shape and form. I started making short films in college at Emerson in Boston, Massachusetts, and just out of school as well. Those films gave me something to show to potential investors. Now, after over 100 investors believing in my dreams, and many dollars lost, we are starting to make profitable features. To some degree you fall upwards in the entertainment industry.

I wrote our mission statement for Modernciné with far more optimism than reality; however, if you keep saying you are going to make a film that turns a profit, at some point odds are that you will … we kind of have now [laughs].

EVOLVER: Modernciné sounds a bit French to me. Do you like French movies? Are they a kind of inspiration - like the nouvelle vague classic directors Godard, Melville - or is it mere chance?

v.d. Houten: My mother had a company growing, called Modern Art Consultants, where she sold art to corporations for a living. She and I came up with MODERNCINÉ after a long conversation on the phone, while I was still in college. I love the name, and it does sound French, which is kinda cool! I love "Wild Child" by Truffaut. Yes, French cinema is wonderful to watch, and so many of the masters like Godard and Truffaut are an example of effeciency, and cinema that doesn't rely on gimmick. Characters, story, and atmosphere blend into an art that is very difficult to reproduce when you see those films; however, it is always an honor and challenge, to borrow and aspire, to come close to some of the perfection they have accomplished.

You see, I was always amazed by the idea of all these people coming together to make a film. I could never fully understand it, but I knew that the energy of making movies was certainly for me! Of course I always loved to watch them, too!

EVOLVER: By the way, where are the headquarters of Modernciné?

v.d. Houten: We are headquartered in Manhattan on the Upper West Side. I will leave out the exact details to avoid hate mail, which we do get for some of our Jack Ketchum films [laughs]. We also get raves on those titles as well, but you never know, who is reading this …

EVOLVER: In times of The Crisis: do you think that an artist-run independent company like Modernciné has better or worse cards in hand, compared to the big studios like Disney or whatever, where - more or less -  the investors make all the decisions ?

v.d. Houten: The only thing I can say is that I am lucky enough to be making a new film this August. We are starting a new company in fact, for family entertainment. Yes, we have been able to get people to continue to invest, regardless of the economy. Hopefully that doesn't change! I guess for us we are passionate enough, and have made enough films that people enjoy, that people keep rolling the dice. I am very lucky in that regard!

EVOLVER: "Offspring" is the second Ketchum book you are picturising. How did you get in touch with Jack Ketchum?

v.d. Houten: My publicist Joseph Mauceri new him, and he said he would introduce him to me if I wanted. I did, and soon enough found out that Ketchum and I had the same Alma Mater, Emerson College.

EVOLVER: The book "Offspring" contains explicit nudity, in some chapters. Will that occur in the movie, too? In the USA usually graphic violence in movies seems to be much less delicate than to show naked people; in Europe it's quite contrary …

Can you describe the "Offspring" movie a little bit?

"Offspring" is about a feral flesh eating clan of cannibals, out to feast and find its next prey. It deals with what happens when they capture two women, a baby, and bring them back to their cave, leaving the husband of one of the women for dead. It's a very disturbing tale of horror, and I treated it as realistically as possible. I didn't want the film to feel contrived. The horror comes when you believe it could really happen.

EVOLVER: How difficult is it to work with children, especially when the movie is a "bloody & disgusting" horror picture like "Offspring"?

v.d. Houten: Just as with "Jack Ketchum's The Girl Next Door", I always find working with children a pleasure. They are always so fresh and creative, you never know what to expect. We hire children that we know are smart and that want to be working. It's the first most important thing when casting a child actor, to make sure they want to really be part of the film. Many times parents can push their children into the business, and that can be a recipe for disaster. We pride our company on being a safe place for young talent to thrive and grow. Making mistakes is not possible on our sets, as we look at everything as a learning experience!

EVOLVER: Your movies often become jury's darling in international festivals. How important are festivals in fact? Do they really help pictures to being released in theatres, or is it more "meet and greet"? I mean, for fans it's great …

v.d. Houten: Festivals heighten the awareness of who we are, and help us as filmmakers out there to meet the fans. I have also been able to meet and learn from other filmmaker's movies I see at festivals. It's good to know your contemporaries on an international level. I am honoured that so many all over the world continue to want to see our films. It is really cool! It of course helps us to sell our films, when they screen in any way within territories outside of the U.S. The prestige also can many times help increase the U.S. domestic sale of the film.

EVOLVER: Okay! And finally: is there anything you'd like to say or want us to know … ?

v.d. Houten: We rely on the fans to help push our films out there, and help build recognition for our brand and our names. I am thankful that you have asked me to do this interview, and would be more than open to answering any other questions. I guess I just want people to know I am somebody who loves to tell stories, and bring them to big and little screens all over the world. I am excited to do this for many more years to come, and hope that our fans in Austria and Germany come along for the ride!

All you need is Love