In English_Movie Review: Dead in 3 Days 2

The first one managed to become Austria's most successful film of 2006. Now the sequel sees slasher heroine Nina venture into the Tyrolean snowdrifts. Unfortunately, that leaves us viewers somewhat frosty.    26.01.2009 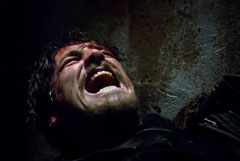 85,000 tickets sold, 15,000 DVD's sold domestically, a US release - thanks to "Dead in 3 Days", Austria has a new sideline as the latest home of the teen slasher flick. With his tale of a group of high-school graduates in the Salzkammergut region and a knife-wielding psycho, director Andreas Prochaska certainly managed to capture the imagination of genre connoisseurs. "Regular" viewers likewise found themselves relieved to discover a domestic film not preoccupied, as usual, with dealing with Austria's past.

Soon, the sequel will be seen in Austrian theaters, pitting scream queen Nina (Sabrina Reiter) against new terrors. The lead character of part one has moved to Vienna in the meantime, where she receives a disturbing phone call in the middle of the night from her friend Mona. To make matters worse, she is also constantly tormented by visions of her blood-soaked friend begging for her help. Nina doesn't waste much time and travels to Ebensee, the locale of the first movie; but no one has heard a thing about Mona there, either. The trail finally leads her to Tyrol and straight into the clutches of a really, really nasty clan of mountain peasants.

While "Dead in 3 Days" was still a genuine slasher pic, its creators moved further into the horror/thriller genre for the sequel. The result is quite ambitious, but unlike the atmospheric original only partially successful.

Good news first: The core ensemble puts on a decent effort. Sabrina Reiter coasts through the somewhat awkward Vienna scenes with her dignity intact, until she can finally unfold her character fully, once she returns to the countryside. Andreas Kiendl's Inspektor Kogler already was the most likable supporting character in part one; it's great to see that quintessential alpine sleuth again. The mountain peasant clan is credible as well, especially the actors portraying the three brothers. Martin Loos and Helmuth A. Häusler bring Gust and Josef to life so effectively that they truly are a pleasure to watch. Granted, their suntans make it appear as if they had just exited a trashy disco, but nonetheless they grant their parts a certain oiliness that lingers.

But now for the disappointing part: the script. Disregarding the story for a moment, the movie starts off by presenting a solid hour of back-to-back talking head scenes. Now that may be acceptable in Austrian arthouse movies, but to create an entertaining horror movie, a little more craftsmanship is required. Then, just when you no longer expect it, the first gripping - and gory - scene smacks you right in the face. What follows are 20 highly suspenseful and, in all respects, rewarding minutes, before the creators decide to turn the heat back down, leaving the viewer once again comatose. 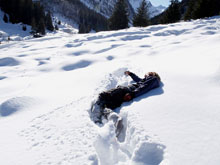 Towards the end the audience is confronted with a slightly forced revelation, striving to provoke a big "Oh", but really only succeeding in a "Yeah, sure ..." It leaves one asking oneself if the many idle scenes at the beginning could have been better used giving more background and developing the peasant clan and their dark secret a little better. Such a move certainly would have had potential.

To hide said idleness, Prochaska tries to at least keep the viewer visually entertained. However, the many close-ups, establishing shots and details captured throughout the first two thirds miss the point. They create - excessive panning aside - undoubtedly picturesque images, but fall short of their narrative purpose.

All in all, these two hours leave one shaking one's head in dissapointment, imagining what kind of a movie "Dead in 3 Days 2" could have been, given the circumstances. The end product is still superior to what the majority of "Saw" and "Hostel" derivatives try to pass off as decent, but to call it satisfying would be exaggerating.

Perhaps the creators had gotten overconfident after their initial success; perhaps one should have streamlined the sequel by 15 minutes or so; of course, it's also possible that "Dead in 3 Days" was simply a fluke ...

We look forward to being proven wrong with a third part. Mainly because the general idea is solid - and, quite frankly, the domestic movie industry needs good genre cinema like the ORF (Austrian national television) needs a lottery win.