The pressure to succeed was enormous, as were the expectations: Zack Snyder dared try his hand on comic fandom's holy grail - and his attempt manages to capture the complexity and atmosphere of the original in moving pictures.    02.03.2009

For many months, the fan community has been approaching boiling point - thanks to an increasing supply of stills, clips and rumours on the film adaptation of their beloved piece of sequential art, "Watchmen". This DC graphic novel, created by Alan Moore and Dave Gibbons, is undoubtedly one of the milestones of modern popular culture. Ever since its release about two decades ago, there has been constant speculation as to who would be able to bring "Watchmen" to the silver screen - as well as how and with whom.

After being sidetracked numerous times, the project finally ended up with Zack Snyder, who had managed to prove his skill at suspense and muscular visuals (in this case, quite literally) with his remake of "Dawn of the Dead" and the Frank Miller adaptation "300". "300" in particular managed to divide the audience with its highly stylized übermensch aesthetics.

Traces of that can be found in ""Watchmen" as well. Aside from that - and this may come as a surprise - it's neither the action nor the visuals which dominate this comic book adaptation.

First things first: Let us agree to let sleeping fanboys lie and attempt at least a reasonably objective appraisal. Does "Watchmen" work as a movie? Does Snyder's adaptation do anything for people to whom names such as Nite Owl or Dr. Manhatten were hitherto unknown?

At first, orientation between all those superheroes doesn't always prove easy. For starters, there's the first generation of Watchmen, who fought crime as masked avengers during the 40s, none of them having any unusual or superhuman powers. They themselves adopted the name "Minutemen". Throughout the course of the 50s, Silk Spectre, Hooded Justice & Co. gradually dropped off the radar, thereby fading from public awareness.

Following in the Minutemen's footsteps, just a few years later, a new, second generation of vigilantes was formed. They consist of physicist Dr. Manhattan (Billy Crudup), who after a freak lab-accident is the only one with actual superpowers, physically resembling a radioactive member of the Blue Man Group; Rorschach (Jackie Earle Haley), a masked retribution junkie and former private eye; the seductive Silk Spectre II (Malin Akerman); self-declared genius Ozymandias (Matthew Goode); and, concluding the lineup, the second Nite Owl (Patrick Wilson), a shy, sensitive type with a penchant for technical gimmicks.

The connecting link between the first and second generation of superheroes is the colorful character Comedian (Jeffrey Dean Morgan). This professional cynic, whose mysterious death sets the plot of "Watchmen" in motion, is found in his own apartment - murdered by an unknown assailant. Rorschach senses a conspiracy, in which all former superheroes are to be eliminated one by one. 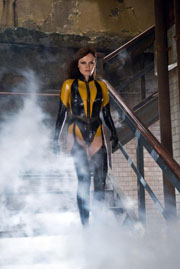 As he already had in "V for Vendetta", Alan Moore created a dark political scenario for his "Watchmen" comic. This time though, he didn't look to the future, but rather the recent past. The actual story takes place in the year 1985. It's the era of the cold war. The United States, under President Nixon (!), serving his third (!!!) term, and the Soviet Union are maintaining their scenario of mutually assured destruction, keeping the world on the brink of nuclear armageddon. There is no room for superheroes in this bilateral world order - so they have been forced into retirement in the 70s. Only under orders of the president are they allowed to legally ply their "trade".

This is the basis on which both film and comic book operate. In lavishly shot flashbacks, Zack Snyder shows us the lives of the once celebrated heroes, from their first meeting as fans of other superhero stories to the more or less "conventional" careers of the second generation. Just as each figure individually references their comic-book forebears - Nite Owl practically screams out Bruce Wayne/Batman - Snyder himself references other classics of cinema. Occasionally, that happens rather bluntly, such as with his "Apocalypse Now" reprise, but it's nonetheless rather charming, as it's done strictly with tongue placed firmly in cheek. Even his built-in "300" reference fails to truly offend. Last but not least, the movie shows off its satiric qualities in the scenes involving President Nixon, depicted with a particularly long nose (Pinocchio?), and his National Security Advisor Henry Kissinger.

While Frank Miller's attempt at transferring "The Spirit", another classic of sequential art, to the big screen, ended in glorious failure, Snyder manages to cleverly sidestep most of the inherent pitfalls. It must be said though that even he can't entirely pry himself loose from his obsession with pretty superficialities. The fact that posing is apparently second nature to him can easily be inferred as early as the intro, where stylish slow-motion effects alternate with isolated accelerations.

Compared to "300" (also known as the first feature-length special effect) though, the optical wizardry is utilized far more subtly. Only in the finale does Snyder really pull out all the stops. But since there is nothing less at stake here than saving the world, digging that deep into the bag of tricks is quite justified. And a certain amount of showmanship - let's not kid ourselves here - is pretty much expected in a 100 million dollar comic book adaptation. The mostly male target audience will no doubt be further enticed by visuals of a completely different sort. Malin Akerman's (playing sex kitten Silk Spectre II) skintight latex costume could be classified as a lethal weapon and will no doubt be responsible for many a (nerd's) wet dream. The same goes for the sappy softcore scene between Silk and Nite Owl, which puts Snyder high in the running for Adrian Lyne's successor. 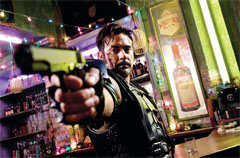 The mood permeating "Watchmen" is murky yet not monotonous. Worlds lie between the ever-present, atmospheric Noir feeling dominating the episodes around Rorschach and the parodistic appearances of the vain self-made entrepreneur Adrian Veidt (aka Ozymandias), almost making them appear as two separate movies. At least that's how it seems. "Watchmen" not only sets itself apart from other comic book adaptations by its runtime of about two and a half hours; the complexity and ambivalence of its so-called superhero cast wouldn't fit with the clean-cut Peter Parker and Clark Kent crowd either.

While the Comedian finds refuge in searing cynicism and eliminates human life without any scruples, his former comrades-in-arms Rorschach and Ozymandias create uneasiness and disgust by grace of their unsympathetic appearances. Alan Moore's handwriting is unmistakable here. After all, he was the creator of V, the mysterious revolutionary from "V for Vendetta", a highly controversial personality whose ethics and methods were rather debatable. It's remarkable that Snyder managed to spend so much time on each individual character. The first 90 minutes are essentially a very long introduction to the "Watchmen" universe and its main protagonists.

What is normally considered as "plot" tends to be developed in passing, on the side, as a kind of background noise. Instead of a hackneyed, action-heavy superhero-vs.-supervillain story, the audience is offered numerous cross-references to the history of superhero comics and crisply cut (anti-)heroes with habits ranging from the loveable to the bizarre.

It's particularly the small details, hidden in subplots, such as Rorschach's penchant for eating beans straight out of the can, or the problematic mother-daughter relationship within the house of Jupiter, that give testimony to the movie's affection towards comics in general and Moore's original "Watchmen" specifically. Merely the figure of egocentric do-gooder Adrian Veidt seems somewhat schematic and conventional, compared to the other characters. For once, the prejudice towards comic relief seems applicable.

But to reiterate the original question: Yes, these "Watchmen" work exceedingly well as a movie. Whenever it appears that Snyder has once again lost himself in his slick videogame aesthetics, he corrects himself promptly in the next scene. Thus, it's hard to fault him even for the occasional hyperbolic action sequence towards the end. And anyone that starts his film off with Bob Dylan's "The Times, They Are A Changin' " and sets the climax to "All Along the Watchtower" can't have done too much wrong, anyway.