Andreas Prochaska's "Dead in 3 Days" was not only a good horror movie, but also the most successful Austrian film of 2006. Recently, the sequel was released ... EVOLVER met leading lady Sabrina Reiter and spoke to her about this installment, her beginnings as an actress and her favourite horror movies.    23.01.2009

EVOLVER: "Dead in 3 Days" was the very first teen slasher pic made in Austria. What can we expect from the sequel?

Sabrina Reiter: Something entirely different. The second movie is more of a one woman show. It has an all new story, so you can watch it regardless of wether you saw the first part or not. It continues with the surviving characters from part one, Mona and Nina, but it's really not essential to have seen the previous movie. The sequel's primary element is snow. I think that's a cool feature; the previous movie had more water. Now we have snow, freezing temperatures and a certain Western-, survival-, mystery-feeling. And Nina, of course, has to push her own limits again ...

EVOLVER: How did you, as a non-classically trained actress, prepare for your character and her backstory?

Reiter: I read a lot of books on the topic, talked to doctors ... What happens to a person when such events take place? We wanted to make it authentic. When this sort of thing happens to you in real life, you naturally end up with post-traumatic stress syndrome. You think that you've more or less gotten over the whole thing, but it only takes one tiny detail to remind you of your experiences, music for instance, or scents or things you see - and you immediately regress back to your old emotions and fall into a deep, deep hole.

That's the starting point for part two: Nina's living a pretty normal life again, has moved to Vienna, is working, is perhaps a bit more introverted than in part one, but overall still pretty easy-going. And then she gets a phone call from her friend Mona and sees a newspaper article saying they finally caught the killer from the first movie. And that brings it all back. Including a guilty conscience, since she practically left her best friend behind, without telling her anything.

EVOLVER: Could you see yourself making "Dead in 3 Days 3"?

Reiter: Sure, I'd be game, as long as it tells a good story. After all, this was my first foray into the genre and into show-business. But I don't think there'll be a third movie. At least it hasn't been discussed yet.

EVOLVER: One might say you're Austria's first scream queen ...

Reiter: If you want to see it that way, yes, perhaps. A lot of people ask me if I really want to be typecast that way. But I actually consider it a compliment. To play in this genre was a dream come true for me. I'm certainly not going to be ashamed of it. 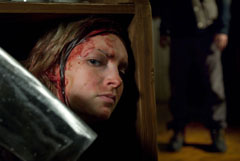 EVOLVER: After all, it was the first Austrian film of that genre, and you portrayed your character very authentically.

Reiter: That's also the case in part two. Of course there are scenes where the viewer thinks to himself: "Oh god, don't go up there!" But if you comprehend the role, it becomes evident that she has to.

Nevertheless, we worked out every scene in such a way that it appears completely authentic. That's typical of Andreas Prochaska, and I think it's great. Because you don't have to stand around on set and create something artificially.

EVOLVER: During the first shoot, it was mainly water; this time, you filmed in snow. Did you have to gather all that snow?

Reiter: We got lucky: Just before our first shooting day, it snowed a lot. It was our good fortune, as we got to do a lot of exterior shots. For the indoor scenes, we had to collect snow and shovel it together. In the movie, it looks as if it's deepest winter. It was also pretty cold.

Once, during a night scene, the temperature dropped to minus 16 degrees (centigrade). But the crew had a tougher time than me, because as an actress, I had my trailer, electric blankets, and assistants always bringing me warmer clothes. That almost made me feel guilty towards the others.

EVOLVER: But you probably had your hands full yourself; for sure there were scenes that were very demanding.

Reiter: Yes, although the first movie was more strenuous in a physical sense. The scenes where they pull me into the boathouse - maybe it doesn't look that spectacularly cold, but it was September and really windy. I was completely soaked and spent all night out in wet clothes. Sooner or later, you eventually hit your limit; and I had three such nights. That was pretty shitty.

In part two I was always bundled up well, so it worked a lot better. There was only this one scene where I'm walking through the snow and I drive my fingers deep into it - I would have never thought that snow could be so painful! It's unbelievable, just for once try sticking your hand into deep snow for thirty seconds before pulling it out. I stood there and thought I'd cry. That's how painful it was. On the other hand, it was valuable, since I could identify with my character much better.

For the scenes where I come indoors, I always threw myself in the snow first, so I could get that specific feeling you get coming in from the cold, when your fingers thaw. It hurts a lot.

EVOLVER: So you really got into your role?

Reiter: You have to do that if you want to craft an authentic performance. Otherwise no one will buy it. The camera and of course the audience's eyes on the screen don't suffer lies. That was my basic prerequisite for myself: to really identify with my character.

And it was very rewarding to portray her that way.

EVOLVER: That must have been a lot harder the first time around, but it was very credible.

Reiter: Well, preparation was a bit different then, because we were all part of this clique. In part two, I spent a lot of time alone. But I knew what was in store for me, how it looks on the set, how scenes are created and shot ... In the first movie, I didn't have a clue about these things. How a scene is set up, how the takes are shot, how many takes you end up doing ... And also, what happens just before a scene, things like "sound, cut" - it was all very new to me. Now I just enter a scene, do my thing and leave again.

EVOLVER: So you learned a lot from part one?

EVOLVER: How did you become an actress?

Reiter: It was always a childhood dream of mine to become an actress, singer or TV personality. I worked as a TV presenter - and realized it wasn't my thing. Before that I trained as a dental hygiene technician, simply to have a secure job to fall back on. After the TV work I thought to myself, for starters you'll need a job, because acting schools are expensive. I applied at an advertising agency, worked there, and was planning to enrol in a Berlin acting school in late 2005. Then, in April '05 I had my casting, which truly must have been fate. I was out partying, when all of a sudden this casting agent was in front of me, shoving this flyer into my hand telling me "Hey, come to the casting tomorrow." So I went - and got the lead.

EVOLVER: What movies do you like to watch personally?

Reiter: I grew up with horror movies, because I have an older brother that loves to collect them. Until the age of 17 I was a huge horror movie fan and watched everything I could get my hands on. I haven't quite kicked the habit, but in the meantime I have become a bit weary of them - at least as far as the newer ones are concerned. "Evil Dead" (because of the branch scene), "Bad Taste", "The Texas Chainsaw Massacre" and the like are among my favourites, "Hostel" and similar things I can't watch. My brother is always trying to explain to me why they're good, but I still think they're crap. Although the ones coming from Asia do have a few good ones in the mix. That's basically the new generation of horror movies, it's pretty chilling, the movies they make. Currently though, I prefer to watch ... the new Jesse James film for instance, which is one of my favourites, or drama or comedy. I love Ben Stiller and Adam Sandler, movies like that I can watch any day.

EVOLVER: What kind of project would you like to do next?

Reiter: A comedy would be cool, because I think I'm pretty funny and could do all kinds of stupid stuff. And I'd also love to do it because you can really go overboard. Let's see what happens. There are some offers, but nothing final.

EVOLVER: What's it like to be on tour? Was Locarno exiting?

Reiter: The Locarno Film Festival was great, cause you're sitting with 8.000 other people in the audience, watching the movie. It's pretty awesome to get applause for your scenes - and people get scared too. The best kind of instant feedback.

EVOLVER: Did you ever get scared yourself during the shooting of the film?

Reiter: In the first part, not at all. But in part two, there was this one scene ... One of the sons from that weird family that lives out there is chasing me. That was horrible. Because that's the way I am: if somebody is following me, I freak out. My brother always did that to me.

He was always chasing me as a kid, and ever since, I've been kinda paranoid.

EVOLVER: Part two is supposed to be bloodier than the first.

Reiter: A lot! Darker too. And better. I'm looking forward to what people will say. 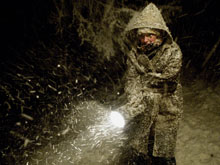 EVOLVER: What is your opinion of people that say: "Ah, it's been done before - it's nothing special"?

Reiter: I think our film should be acknowledged, because we're the only ones in Austria to have ever made such a picture at such a high standard. Although after part one we did notice, after watching "Friday the 13th" with Andi, that our movie has more or less the same story. He didn't realize it either up till then, but what the hell... We made two cool movies, and that's what counts.