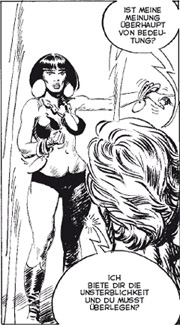 Imagine for a minute you're a decathlete, an olympic medalist, and a very eligible bachelor - and all you really want is a good night's sleep. When you wake up, however, you realize you've overslept by 2000 years. And the future ain't necessarily so bright you gotta wear shades. In this reissue of one of the most exceptional comic book series of the 70s we encounter a whole bunch of monsters, vampires, aliens and seductive women ...    22.10.2008

Holernes: "Have you got answers to your questions?"
Andrax: "Not a single one! Chaos is silent." 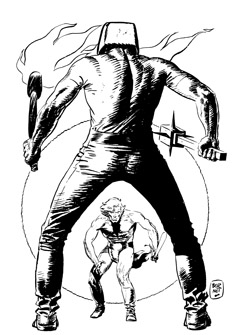 Decathlete Michael Rush has just sucessfully competed in the Montreal Olympics. Everything seems to be going just fine for the fair-haired stud with the trendy mullet - until he's kidnapped by a gorgeous woman in service of a Mad Professor named Magor and brought (where else?) to the latter's subterranean laboratory.

The professor then undertakes a truly chilling experiment: he puts the olympian in a 2000 year long suspended animation, in order to let him awaken under the name Andrax in a presumedly perfect civilisation. Any regular reader of EVOLVER ought to have surmised by now that the future is not quite the way the progress-worshipping Professor Magor has imagined it in his idealistic, summer-of-love addled brain. Instead of being greeted by love, peace and wellness, Rush/Andrax is confronted with a picturesque nightmare world in which past, present and future epochs inexplicably (for now, at least) coexist.

Armed with only a sword, which he happens to find in a cave of monsters, and the knowledge from his own time (good ole 1976), our hero battles his way through chaos and proves once again that brute physical force, combined with a healthy dose of common sense, is always superior to patronizing, professorial pretension. In his quest for the truth (which is out there once again) he is joined by Holernes, the pugilistic barbarian king of the Kauna tribe - after a brief introductory fistfight, of course. The two go on to gradually develop a friendship, quite comparable to Starsky and Hutch.

The companions' odyssey is no longer about "Whence do we come?" or "Where do we go?" ... It only knows land, water - water, land and now the dry, dry desert under their restless feet.

This is the year in which Andrax' first adventure appeared - in issue no. 27 of the comics magazine "Primo", released by Rolf Kauka Publishing. The imposing figure of the sword-girded postapocalyptic protagonist was originally created for Primo as a replacement for a planned series around a figure named Kronan (!) and continued its run in the Kauka serials "Action Comic" and "Super Action" as well as a brief appearance in the competing Axel Springer publications "Zack" and "Zack-Parade".

Andrax himself is a creation of comic artist Jordi Bernet (who later on made another lasting contribution to comic book history with "Torpedo"), author Miguel Cussó (Bernet's uncle) and Rolf Kauka's managing editor at the time, Peter Wiechmann, who also came up with the original idea. Some "Andrax" adventures were penned by Kauka veteran Ludwig Fischer, who brought his own ideas into the series. The narrative found in the actual pages of "Primo" et al. was written by Wiechmann and editors Gaby Schuster and Peter Puls.

While Kauka's most famous creation, "Fix & Foxi" catered to an audience of children and pre-teens, "Primo" and "Action Comic" (or "Super Action") pandered to the adolescent and mature crowd. Kauka Publishing preferred this two-pronged approach not only in regard to its target audience: Alongside successful original creations such as Fix and Foxi (or Lupo, who's definitely worth mentioning here) and of course Andrax, Kauka also introduced highlights of the European comics scene to its readers for the very first time, such as "Spirou" (renamed by Kauka to "Pit und Piccolo"), "The Smurfs" and "Asterix", but also Hal Foster's classic "Prince Valiant".

However, this happened with quite idiosyncratic translations at times, which in one case even caused trouble between Kauka Publishing and Asterix creators Goscinny and Uderzo - who accused Kauka's textual reinterpretations of having "right-wing tendencies". Be that as it may - Kauka's introduction of these series to the German language market is indisputable and even today shows a love for experimentation one doesn't find much in these parts. With Andrax, Kauka created a character perfectly in sync with the disillusioned Zeitgeist of the 70s and all its postapocalyptic projections (such as the "Planet of the Apes" series or John Carpenters "Escape from New York"), while still being well rooted in traditional beef-cake fantasies such as Tarzan.

Later on, in the 80s and 90s, things quieted down a little for Kauka, "Fix & Foxi", "Primo" ... and "Andrax", too. The latter briefly managed runs in Spain, Portugal, Norway, France, Italy and even the US, but these sojourns were only fractions of the potential the "Andrax" saga would have had.

And Andrax himsel? He lies waiting, unseen in the fog of an uncertain future.

Home! No more feeling around for your sword half-asleep ... being combat-ready at the slightest noise ... You're taken care of, stretching out in a hot bath, feeling the touch of a woman again. The meandering path through the labyrinth of past and future existing in the present leads Andrax and Holernes back to the realm of the Kaunas.

In December, Alexandra Kauka, CEO of Kauka Promedia (which also owns the rights to the Kauka archive) signs a contract with Germany's most ambitious comics publisher, Cross Cult ("Torpedo", "Hellboy", "The Walking Dead" and many more). The essence of the contract is easily outlined: Kauka Promedia plans to resurrect the brand name "Primo" in order to sell their more realistic comics such as "Andrax", and more specifically have them released by Cross Cult under the Label "Rolf Kauka's Primo Comics".

Cross Cult was the preferred Partner of Alexandra Kauka from the beginning, which should hardly come as a surprise, considering their output to date.

Holernes: "We push along - as soon as dawn breaks!"

In October, the first "Andrax" book, "Experiment of Horror", is released as a Kauka/Cross Cult collaboration. The old black-and-white material is lovingly restored, relettered and reedited by Peter Wiechmann himself. In a planned arc of five books in total (all in classic Cross Cult format) the team retells the story of Andrax, for the very first time in chronological order, including previously unreleased and/or subsequently created episodes by Jordi Bernet.

So, Andrax is back again to ask the big questions in life: Whence do we come? Who are we? Where do we go? And where the hell did that damn pterodactyl come from? Where's my sword? And where's your friend and sidekick when you actually need him? 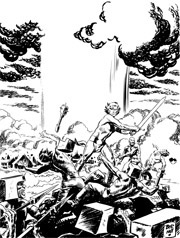 In the human endeavor, survival was paramount. Friendship developed only much later and actually wasn't foreseen on evolution's schedule. That is most likely the reason why the high praise of friendship has rung true throughout the ages, since friendship throughout time was ever only a halcyon dream, a fairytale fantasy, more an exception to the rule than pragmatic reality.

Andrax however has experienced it: that familiarity, unshakable by any unfortunate turn of chaotic events. Holernes is Andrax' friend in the deepest sense of the word, and the same applies vice versa.

For the first time since being catapulted into the future, Andrax feels loneliness, solitude that seems to unite all ages.

Holernes is on his way back to his people - the two friends have parted ways. But they know with unrelenting certainty: We shall meet again!