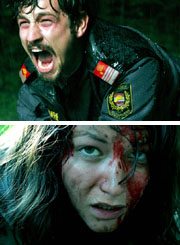 The Salzkammergut is not just a fun mountain resort region ** anymore ... Since last year it has added serial murder to its attractions - as Andreas Prochaska's Austrian contribution to the genre now demonstrates on DVD.    10.03.2008

Movies from Austria usually tend to terrify - but with Andreas Prochaska's horror flick, the effect is actually intentional.

After having to wait till 2005 for an Austrian filmmaker (Marco Kalantari) to try himself at the SF genre, Prochaska delivered the very first home-made teenage slasher picture. Instead of carrying on the local tradition of cinemaphile-/artsy movies that marry unfocused thought constructs with badly written generic 9-to-5 stories (which typically end with Ulrich Seidl-esque back-alley fornicating and/or discourses about the joys of shared monthly bleeding), both directors wished to create decent popcorn fare and prove that the moniker "Made in Austria" can mean something very different indeed.

Unfortunately, Kalantari's "Ainoa" turned out to be narrative fluff, but at least it looked good and showed Austria as location for a futuristic adventure, instead of rehashing the disgusting housing project stories one tends to avoid in real life anyway. The more technically experienced Prochaska, on the other hand, wanted to prove that it is well possible to tell an exiting homegrown horror story - and approached "In 3 Days You Will Be Dead" a lot more professionally. 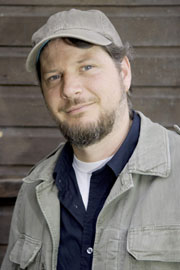 The Vienna native set his teenie ripper (co-penned by Thomas Baum) in the Salzkammergut (note: mountain resort region of Austria, popular since imperial times) about five kids straight out of high school, who all receive the same, title-giving text message.

Soon after, an unknown Killer starts decimating the group from Ebensee one by one, until the local authorities finally start taking the message seriously. But by then, the surviving teens have a hunch where they might find their bogeyman, and attempt to take him down themselves ...

Although the first 45 minutes of the movie are rather pedestrian, the Alpine horror begins to gain steam afterwards and delivers a decent third act, with suspense, gore and the works. One hasn't seen anything like this in Austria for a long time.

With a healthy dose of local color and a few acting novices (that prove to be on par with their professional colleagues), Prochaska actually managed to shoot a working slasher-movie in Austria. The characters speak with a credible accent, you recognize those little local things, and overall you come away with the joy that someone finally took a shot at such a project.

So, if you like to watch commercial horror movies from time to time, but aren't well-versed on the subject - buy this film or at least borrow it from your local rental (and while you're at it, grab Gerald Kargl's serial killer shocker "Fear" from 1983). Genre aficionados can expect your basic cut-and-dry slasher, but at the very least, it's up to international standards: A dark secret from the past, a killer in dark, baggy oilcloth - the same gimmick that was used by the "I Know What You Did Last Summer" franchise just a few years ago.

Prochaska once called himself "not your classic horror movie nerd" in an interview, and refuses to watch movies like "Hostel". To make a fresh chiller with an original script, that's probably not a requirement either - but if one wants to contribute to the genre, one should at least watch some of the more important works ... Still, his movie needn't hide itself from it's German cousins such as Stefan Ruzowitzky's "Anatomie" movies, Robert Sigl's "School's Out" duo or Michael Karen's "Flashback - Homicidal Abilities"...

The DVD version of the highest grossing Austrian film of 2006 offers Deleted Scenes, a Making of, a Premiere Special and not one, but two audio commentaries. In the director's commentary Prochaska tells a lot about the shoot and production, although he he tends to lose himself in descriptions. Sadly, he doesn't elaborate on the creation of the film itself, the script and pre-production phase, and most of all, the situation of the horror genre within the local film scene as well as the inavoidable hurdles he must have faced finding financers for the project. (That would have definitely given an interesting insight into the maze that is the Austrian film subsidy system.)

Incidentally, Allegro Film is currently developing not only a sequel to "In 3 Days You'll Be Dead" (script by Agnes Pluch), but also another genre piece with "Asylum" (script: Simon Aeby). While half of the latter's summary - the part about old-fashioned Viennese lunatic asylums - sounds highly promising, its plot about a film student who wants to shoot a horror movie in one of these buildings quickly dashes that hope on the rocks of reality. But as long as their marketing department knows how to take advantage of the internet and the power of fandom, chances are it might just happen that Austrian movies get sold to the Americans on DVD. In any case - this development pleases us, and we sincerely hope that Sabrina Reiter manages to elaborate on both her acting talent and her abilities as scream queen in the sequel...

In that spirit: Scream, Mariandl, Scream! ***