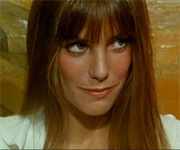 When these two lovebirds started moaning the words "Je t'aime (moi non plus)" back in the day, they not only made it straight to the front pages, but also put half of France in a frenzy: Serge Gainsbourg and Jane Birkin. In this movie, they met for the first time.    30.05.2008

At 61, Jane Birkin is still stunning - not in the flat-chested, Lolita-esque way she was during the swinging Sixties, of course, but that age is dead and gone anyway. And it didn't take the death of her former partner Serge Gainsbourg in 1991 to end it, either.

How the dream couple found each other can now be retraced in this reissue of the film romance "Slogan" by Cult Epics. Thanks to Director Pierre Grimblat's ("Commissioner Navarro") consistent use of close-ups as a stylistic tool in the 1968/69 film, it is quite evident that sparks flew between the two main protagonists, with Serge falling victim to Jane's smile (ah, that coquettish gap between her teeth!).

Jane Birkin had already obtained sex symbol status with her very permissive portrayal of teenage yearning as "The Blonde" in Antonioni's "Blow Up", creating a visual alternative to Brigitte Bardot. About two years later - at the tender age of 21 - she was chosen by Grimblat for the role of Evelyne Nicholson. When her character happened upon the commercial filmmaker Serge Fabergé on location in Venice, it precipitated the "for real" relationship between Birkin and Gainesbourg. The age difference of approximately 18 years is adressed in the movie as well: Serge's alter ego is 40, sucessful and bored with his marriage and family back in his native Paris. Venice, where he came to receive a prestigious prize for an after-shave commercial, turns into a veritable laguna d'amore for the unlikely couple. This initial phase is fluttering and magical, but tragically all too brief: wild with passion, Evelyne follows her lover back to France, where they increasingly drift apart. This is due - among other things - to the fact that Serge isn't even thinking of leaving his comfy and familiar life as a family man. Bored by this double life, Evelyne mutates into an adorable shrew, while Serge regresses into his cold, cynical self.

The fact that this picture is no masterpiece doesn't matter at all. It nonetheless conveys the spirit of its decade in a most charming fashion.

Incidentally, Melvin van Peebles ("Sweet Sweetback's Baaaaadassss Song") contributed to the dialogues; the fawning lines however play a comparably small part and frequently drift into irreverent chirping. Far more significant - and impressive - are the opulent images of the Sixties. Especially when Serge starts laying on his bon-vivant and jetsetter routine (which the then already aging braggard does excessively particularly in Venice), the setting seems at least as stylish and authentic as an early Bond movie. And don't forget that extra dash of love ...

A quick note on the music: Serge Gainsbourg's soundtrack is an atmospherically dense, poppy mixture between beat and chanson that seems timeless despite its obvious reference to the Sixties - even compared to the Kills', who covered the title theme "I Call It Art (Le chanson de Slogan)" for the sampler "Monsieur Gainsbourg Revisited". And somehow, one can't help imagining oneself hearing "Je t'aime (moi non plus)" throughout the 90 minutes duration of "Slogan". Actually, at that time there was "only" a version with Brigitte Bardot in existence. Right after principal photography ended though, Gainsbourg entered his recording studio with Birkin - and recorded a substantially more risqué version. But that's another story ...